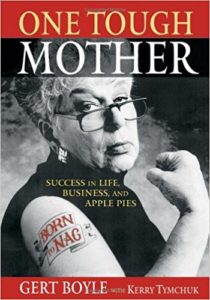 Originally published in the Portland Business Journal in March of 2017.

Gert Boyle is the famous face of Columbia Sportswear and the first woman ever inducted into the International Sporting Goods Hall of Fame. How she got there should be an inspiration for small business owners and anyone facing daunting odds. She defied cultural expectations, both in terms of gender roles and traditional retirement age. She is 93 years old, still involved in the business and still chairman of the board. Gert has been going to work at Columbia every day for over 50 years.

After the 1964 death of Paul Lamfrom, Gert’s father and President of the Columbia Hat Company, Gert’s husband Neal Boyle became President. Meanwhile, Gert’s mother Marie Lamfrom became even more involved in the daily company operations. Marie made it clear that she had no intention of becoming a widow who simply sat at home or played bridge with the ladies. Marie worked for Columbia until she passed away at age 86.

After Neal Boyle died at age 47 in 1970, Gert took over the operations of what was now Columbia Sportswear. Her oldest son, Tim Boyle, dropped out of college to help with the business operations. Despite business revenues of $800,000 at the time of her husband’s death, when Gert attempted the sell the business, the lead prospective buyer attempted to drive down the total purchase price to around $1,400. At that point, Gert saw no advantage in selling the business.

Gert believes that the biggest mistake she made during the first year following her husband’s death was to forget his motto, “self-examination is better than self-defense.” The company began moving in the right direction when she and her son, Tim, started listening to the wisdom and experience of people who knew more than they knew. This highlights the importance of good advisors.

In 1998, the company was taken public primarily for estate planning purposes. As a reminder, our federal estate tax is currently imposed on estates valued at $5.49 million or more and a 40% tax is imposed on the amount more than $5.49 million. Columbia Sportswear is currently valued at over $3.44 billion. Had Columbia Sportswear remained a closely held company and if a majority shareholder passed away, the estate would have owed a tremendous amount of money in taxes. To pay those taxes–due within nine months of her death—the estate would have had to come up with a significant amount of cash, a huge challenge for a closely held business with few eligible shareholders. Once Columbia Sportswear stock became publicly traded, shares could be sold on a broadly accessible stock exchange and cash could be generated to pay for estate taxes.

While serving as Chairman and the public face of one of the world’s most renowned companies, Gert has quietly made major philanthropic gifts. Surely influenced by family again—Gert’s sister Hildegard Lamfrom, a world-renowned molecular biologist, mentored Brian Druker, now director of the Knight Cancer Institute–she made a key donation to match the OHSU challenge. While Gert expected to give without public recognition, she wasn’t dismayed when her identity was disclosed. “They couldn’t spell ‘anonymous,’ so they leaked it,” Gert once joked (PBJ, 9/2/2014). “It didn’t take a rocket scientist to figure out who it was. They thought it was a man. That’s the thing I got the greatest kick out of.”

Gert, a housewife until 1970, unexpectedly became one of Oregon’s most recognized businesspeople while engaging in anonymous charity. To prepare for the unexpected in business or philanthropy, perhaps it is best to listen to the wisdom of others and go public only when necessary.