Thomas Kinkade was an American painter who passed away in April of 2012. He passed away unexpectedly as a result of acute intoxication from alcohol and Valium. At the time of his death, he was legally separated from his wife and lived with his girlfriend. As part of the legal separation, Mr. Kinkade and his wife had divided some of their assets and Mr. Kinkade had received full ownership of his home. He and his wife had also executed a formal estate plan in 1997 prior to the breakdown of their marriage.

After Mr. Kinkade’s death, his girlfriend came forward with two informal handwritten wills giving her $10 million and his compound, which includes his house and his studio along with instructions to establish a museum to house his artwork. The first will was signed in November of 2011 and the second will was signed in December of 2011. His estate was worth over $60 million. 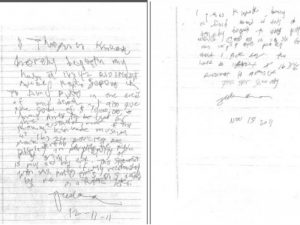 A probate case was then filed in court to sort out which estate plan should control – the formal plan executed with lawyers or the informal, handwritten one that was signed last?  A plethora of legal issues arose from this.

Did Mr. Kinkade have legal capacity to sign his Will?

In California, handwritten wills are deemed to be valid wills, even if the wills are not properly witnessed. This is in contrast to Oregon’s law which requires that a valid will have two witnesses. Therefore, the fact that the wills lacked witnesses was not a fatal flaw because Mr. Kinkade was a California resident.

Mr. Kinkade’s surviving widow argued that he wrote the wills when he was drunk and was not of sound mind. Her representatives stated that the couple had created a formal, written, and irrevocable estate plan. Mr. Kinkade’s handwriting was barely legible, which is particularly noteworthy because of his profession as an artist.

His surviving girlfriend argued that the couple’s assets had previously been divided between the two of them as part of the legal separation and that he had full right to dispose of his assets as he believed appropriate through his will. Mr. Kinkade’s attorney had stated that Mr. Kinkade had spoken to him about changing his estate plan to leave something to his girlfriend. Also, the two wills were signed about a month apart but had very similar terms.

Was Mr. Kinkade’s Will Effective to Carry Out His Wishes?

What Do We Know for Certain?

Mr. Kinkade’s formal estate plan was executed prior to the breakdown of his marriage. Estate plans are always drafted based off of the life circumstances that exist at the time the estate plan is signed.  If Mr. Kinkade would have formally executed a new will, the dispute between his girlfriend and his estranged wife would have been much cleaner and dirty laundry resulting from this unfortunate situation wouldn’t have been aired publicly.